ROME, Italy – “Invest in the development of the tourism industry in Africa, and the current flow of economic migrants from the continent to Europe will become more manageable and, eventually, cease

ROME, Italy – “Invest in the development of the tourism industry in Africa, and the current flow of economic migrants from the continent to Europe will become more manageable and, eventually, cease to pose the kind of challenges it does today.”

These were the words of Zimbabwean Tourism and Hospitality Minister, Dr. Walter Mzembi, when he met with Dr. Dorina Bianchi, Italian Undersecretary of State for Cultural Heritage and Tourism at her Ministry Headquarters in Rome this morning. 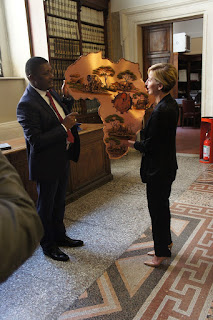 Dr. Mzembi was in Rome on the third and final leg of a trip which has taken him to Portugal, France, and Italy in pursuit of his bid to secure the support of UN World Tourism Organization (UNWTO) Executive Council members in advance of the May 2017 election for a new Secretary General for the organization.

Dr. Mzembi was endorsed as Africa’s candidate for UNWTO’s top job by African Heads of State and Government at the July AU Summit held in Kigali, Rwanda. 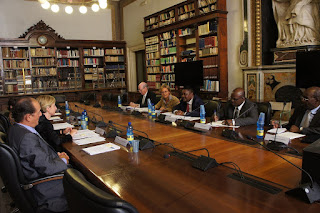 Hon. Mzembi meets with the Italian Undersecretary of State for Cultural Heritage and Tourism, Dr. Dorina Bianchi, at the Ministry Headquarters in Rome, Italy

In a wide-ranging exchange of views with Undersecretary of State Bianchi on the current status of global tourism and the challenges confronting the industry today, Dr. Mzembi said that since his arrival in Rome, he could not help but notice the hundreds of foreigners – including significant numbers of African nationals – engaged in street-vending, waiting and serving at restaurants, and in the hotel service industry more generally.

“All of these people – who I believe have successfully traveled to and established themselves in Italy – are directly engaged in employment derived from and serving the massive tourism industry in Italy. All of them are serving, directly or indirectly, the millions of tourists who visit Italy every year. These may be largely low-level service jobs, often even menial-level jobs, but they are important to the people engaged in that work, and they are important to the success of Italian tourism.”

“And they provide a graphic illustration of how quickly and how easily – relatively speaking of course – the tourism industry is able to create gainful employment. High educational qualifications and large capital expenditure are not necessary to find work or to create work within the tourism industry,” asserted the Minister to his Italian hosts. “It suffices that the opportunities should be created.”

The discussions in Rome revealed the depth of the Italian Government’s concern with the current level of migration from Africa to Italy – mostly economic migrants prepared to risk life and limb traversing the Mediterranean Sea in flimsy, often unseaworthy vessels, in search of employment and a better life in Europe. 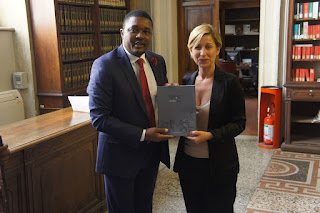 Hon. Mzembi receives a gift from Dr. Dorina Bianchi, the Italian Undersecretary of State for Cultural Heritage and Tourism

Italy’s geographical proximity to North Africa – from where most of the migrants set sail – and the deployment of Italian naval and coastguard vessels on search and rescue patrols in the often perilous Mediterranean waters, means that the bulk of such migrants end up on Italian soil. The increase in numbers since the upheavals in Libya, in particular, have placed considerable strain on Italy’s reception centers and its resources at an already economically-challenging time for the southern European country.

Acknowledging the difficulties, the Minister said that the answer lay in supporting the development of the tourism industry in Africa.

“With targeted tourism-related investment in African countries, the same sort of employment opportunities could be created on the continent itself. The Africans who, today, migrate to Europe to do those jobs, could find such employment in their own countries and would, therefore, have no need to make their way to Europe,” the Minister said.

“Support us as investment and technological partners to develop tourism within Africa, and our people will stay home,” he said.

“A dollar invested in tourism generates the quickest possible return and can have rapid impact in terms of creating employment opportunities and alleviating poverty,” he added.

But Africa, he stressed, had much work to do itself – specifically in rolling back barriers to travel between and among African countries.

“We are the weak link within the overall UNWTO family. Africa enjoys only 3% of global tourism arrivals and a small fraction of the total revenue generated from and employment created by the global industry,” the Minister said.

“We have to work hard to improve those numbers, to make ourselves more relevant to global tourism – both as a source market and as a destination market – and to add value to the ever-evolving, ever-expanding global tourism industry.

Within such an enabling environment, the emergence of an African middle-class, as envisaged in the AU’s Agenda 2063, will see more Africans visiting African tourist destinations as well as traveling beyond the continent as tourists – no longer as economic migrants.

“Africans must come to Europe as tourists, not as refugees,” insisted Dr. Mzembi. “It can happen. It will happen. But we need that support by way of investment, of partnership.”

Dr. Mzembi praised African nations such as Rwanda, Ghana, Benin, and Namibia for having led the way in terms of facilitating entry for all African nationals into their countries, and the nations of the East African Community for having successfully introduced a uni-visa system.

The Italian Undersecretary of State took careful note of Dr. Mzembi’s comments and his vision for the future development of global tourism under the umbrella of the UNWTO.

She stressed the close relationship between Italy and many African countries and noted that “Africa is part of our reality. Africa’s problems are our problems,” and agreed that there was much scope for increased cooperation and collaboration between Italy and Africa in the field of tourism.

She agreed that the development of tourism and economic development more broadly in Africa would create opportunities which would impact positively on the current flow of economic migrants from the continent.

Confirming that Italy’s view of the UNWTO as “a very important institution,” Dr. Bianchi said that her country had sought membership of the Executive Council specifically to ensure a focus on issues of concern and priority for Italy.

The issue of migration together with that of the security of tourists and tourist destinations was of paramount importance, she said.

But tourism was also important in terms of creating economic opportunities and different business models for young people across the world. The role of tourism as a vehicle for peace could also never be underestimated. Italy wished to see the UNWTO continuing to focus on all these areas, she added.

Stressing the importance of culture and national heritage to Italy – which has the biggest number of UNESCO World Heritage sites – Dr. Bianchi said that the promotion of tourism must go beyond scenery and beautiful landscapes and must do more to embrace the promotion and protection of the cultural and artistic heritage of nations and peoples.

She hoped that African countries appreciated the value – in terms of enhancing a country’s attractiveness as a tourist destination – of preserving their rich cultural heritage, and said this was an area in which Italy was already cooperating and supporting a number of African countries.

Congratulating Dr. Mzembi on his candidature, Dr. Bianchi noted that “for Italy, having an African candidate for this post is important.” She thanked him for his visit to Rome and for giving such a detailed overview of his vision for the future of the UNWTO.

She said that she would study his presentation in greater depth and looked forward to meeting the Minister again at the forthcoming Executive Council meeting in Egypt (October 2016), where she would wish to continue their discussion about the UNWTO and global tourism more broadly.

A request by Dr. Mzembi to pay a visit to the earthquake-devastated town of Amatrice in the central Italian province of Umbria, was unfortunately not possible to arrange due to the ongoing geological instability in the area.

Dr. Bianchi, however, extended the sincere gratitude of her Ministry and the Italian Government as a whole to Dr. Mzembi for the message of condolence and sympathy he communicated as Chairperson of UNWTO’s Commission for Africa on the day following the August 23 earthquake which claimed so many lives and caused widespread destruction of homes and infrastructure.