Reunion Island’s annual cross-country challenge, known as the “Grand Raid,” takes place this year from October 22-25, in other words in less than a week.

Reunion Island’s annual cross-country challenge, known as the “Grand Raid,” takes place this year from October 22-25, in other words in less than a week. Competitors and spectators coming to the island to witness the main 3 races – the “Diagonal of Fools” (164 kilometers), the “Bourbon Trail” (97 kilometers), and finally “The Mascarene” (65 kilometers) – will also be able to see the ongoing fourth eruption of the island’s main active volcano, the Piton de la Fournaise, which in an almost unprecedented way has now been spitting its fiery lava for over 50 consecutive days. 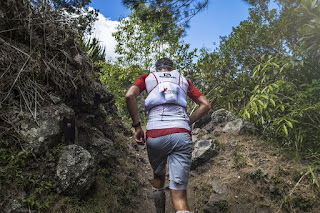 Over the past day, the ongoing eruption has again increased in intensity and the seismological station on the island recorded renewed volcanic activity. The larger lava flows, which can be safely watched from Bert Piton Trail – the viewpoint can be reached after a one-and-a-half-hour walk – will provide an additional attraction to visitors unless they opt for a helicopter overflight to get an even wider picture of the eruption zone and the lava flows. Reunion Island Tourism (IRT) shows the spectacle via the following YouTube clip.

With over 2,500 square kilometers in size, this French Indian Ocean island east of Madagascar is a perfect example of how all clichés about tropical islands are met and then some more, with the conventional beaches lined by palm trees, coral reefs, turquoise-colored lagoons, and also a rugged interior, much of which has been turned into a national park and is recognized as a UNESCO World Heritage site.

For added information about Destination Reunion Island, click on फिर से, and to learn more about one of the island’s top-rated sporting challenges, visit grandraid-reunion.com.